Rybrook Holdings is one of the UK's largest luxury car retail groups selling and servicing new and used cars. Rybrook represents Bentley, BMW, Jaguar, Lamborghini, Land Rover, McLaren, MINI, Porsche, Volvo and Rolls-Royce. Rybrook was set up in 1937 by H Whale and is still operated by the Whale family, who also own and operate Princess Motor Yacht Sales, the world's largest and most established luxury yacht business.

Selected as one of only third UK McLaren retailers, Rybrook was appointed to represent a second McLaren location in 2016 and additional Rolls-Royce and Bentley locations. Lamborghini has also been added to the Group for 2016 further cementing Rybrook's expansion in the ultra-premium automotive segment.

The IT team covers both the Rybrook and Princess businesses with offices across the UK and Southern Spain.

Prior to implementing the Mutiny appliance, the team were using another solution to monitor their 35 file servers, which gave them basic information but did not provide them with more detailed company-wide coverage. Neil Prince, IT Manager at Rybrook Holdings said: The system simply monitored our server performance, disk usage, services running, that kind of thing. We always felt exposed and that we didn't know what was happening on the rest of the network. 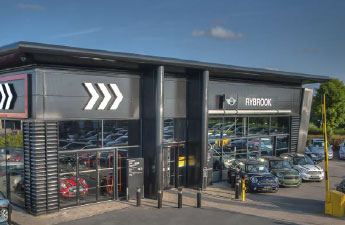 While attending IPExpo in London, Rybrook decided to evaluate their network monitoring needs and met with the Mutiny team. Neil said: We go to IPExpo every year and each year we bring something back. Looking at Mutiny and the way Lawrence demonstrated the product, it just worked. They showed us how easy it was to set up the nodes and devices and we thought 'it can't be this simple'. After further testing through their demo website, and discussions with the team at Mutiny, Neil downloaded the software and within half an hour, Rybrook had half their network set up and working.

Rybrook's team were particularly impressed with the customisation available in the product; in particular, the ability to add your own device naming conventions. Being able to use their own meant they could instantly understand what each device was and its location.

In addition to the simplicity of configuration and the visibility of information, the transparency of pricing also drew Neil to the product. There is no mystery around the node pricing. It doesn't matter if it's a 12 port switch, a 24 port switch or a 48 port switch; it's one device. Looking at the way other competitor products were priced, it was a guess as to what it was going to cost us.

Following an initial trial period, the team decided to purchase a Mutiny appliance with added memory and disk upgrades. Transferring the configuration from their demo system took a matter of minutes. During the initial configuration and the switch to their new device the Mutiny support was fast and effective. We sent questions in and got a response within 10 minutes.Neil added.

Rybrook uses Mutiny to monitor its 21 sites made up of 13 Rybrook, five Princess in the UK and four further ones across the world. Mutiny is currently monitoring 310 devices, made up of routers, switches, printers, servers and other traditional infrastructure technologies. It is also used to monitor their SIPS and IP Telecoms systems. Other devices not covered by the SNMP protocol are simply monitored for up time.

To decide which elements are monitored Neil employs a simple rule: if that device is used by more than two people they want to know if that device is down. Any device that could affect the service for a client is monitored. Neil said:If a WiFi access point goes down then our customers can't work in our customer waiting areaâ€¦additionally it could affect the internal team's ability to service a vehicle.

Working with devices on the remote sites, it is often difficult to picture where these are just from their network names. The Mutiny system gets around this by allowing them to assign site maps. Neil continued: You don't always know where devices are located in the building but with Mutiny you can change the background and put a map with the devices over the top. This, combined with their flexible device naming, enables the team to know exactly which device it is and where it is situated. Furthermore you can link the device directly to the interface, allowing you to simply click on it to be taken to its management console.

Rybrook uses a number of the Mutiny dashboards to separate out the various trouble points. This includes dashboards for CPU/memory, the WANs for Princess and Rybrook and different levels as required. In addition each local site has a web interface that tells them when devices are down removing pressure from the central team.

As a sales-focused business Rybrook has a number websites that are essential to the business. These are monitored by Mutiny so the team can be notified immediately. The system also monitors the intranets and websites for the manufacturers, allowing them to identify when they are down.

Mutiny has already helped fix outstanding issues which were going to be very expensive to track down. Neil said: We had two long standing issues on two of our sites. We had spoken to a number of network specialists and the response was 'we can come in and analyse the network but that will cost you Â£1000 on top of any activity required'. We've now fixed both the issues, purely because Mutiny allowed us to analyse what our throughput was and see when devices were dropping on and off our network.

Mutiny's support has also been another valuable resource. The London Boat Show is one of the go-to events of year for Princess. In 2016 Rybrook were able to use Mutiny to monitor all the devices on their stand. Lawrence Freeman from Mutiny supported the Rybrook team in the configuration, using his knowledge of other clients who had similar challenges. Mutiny allowed them to remotely monitor their technology without having someone there all the time.

The group has plans for further expansion and changes to the configuration. A further three sites are planned in the near future, which will involve the addition of devices. This is not seen as an issue, with Neil adding: The device we have can cope with almost another 8000 nodes. The scalability of the product is unbelievable. Additionally the team plans on using more product features, implementing SMS through their own modem. Following previous overheating issues, they are also looking at implementing the Jacarta environmental monitoring in their server rooms.

Rybrook has found real benefit from the system, with its low load on the network and excellent capabilities: The impact on the network is next to nothing but the visibility it's giving us is paying back tenfold. Neil concluded.

Andy Murray from Mutiny said: The Mutiny appliance has really shown its value to Rybrook and Princess by allowing both on-site and centralised monitoring of their devices. It's good to see Mutiny supporting their team, ensuring customer centric systems stay up and performing. As the business grows our product will grow, and we look forward to working with them and supporting them in the future.