The National Portrait Gallery (NPG) has evolved into a bastion of the British establishment since it was founded in 1856. The NPG is renowned by art lovers throughout the world as one of the leading galleries in classical and modern portraiture.

As art has evolved over the years so too has the NPG, and technology has played an instrumental part in the organisation's vision of the future.

The NPG has a network consisting of a combination of Windows PCs and servers running MS SQL, Oracle and Exchange. Additionally the NPG runs a network of connected devices including 30 printers, hubs, switches and routers. 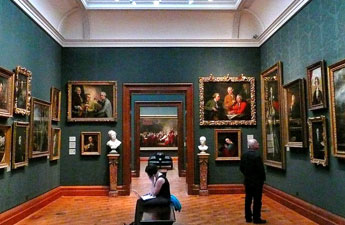 Ann Lahiff, NPG IT Infrastructure and Development Manager, says: The key remit for the NPG was to find a network monitoring system that would fulfil the quantity and volume of tasks required, without the need for a complicated and expensive software package.

The NPG were very clear with their brief. The monitoring application had to be efficient and straightforward with no hidden extras such as additional training and expensive monthly upgrades.

Mutiny was quickly deployed, configured and operational in under half a day. As per the brief, no expensive or additional training was needed.

Initially the NPG used Mutiny to access all printers from the support desk PC. The main aim of this was to be able to configure printer settings (see configuration information) and device status and to monitor remaining toners. Within a month the NPG IT department saw the benefits of using Mutiny.

Ann Lahiff, NPG IT Infrastructure and Development Manager, said: The appliance freed up valuable resource time normally allocated to problem solving, which allowed the team to take a much more proactive approach to systems development.â€

Mutiny has provided the necessary resource for the IT team to be more proactive in their systems application. By use of its alerting system Mutiny's success lies in its ability to track where faults are occurring, thus preventing unnecessary 'downtime'. Productive time is now used for identifying how to solve problems, not having to find where the problem lies.

As the IT infrastructure with the NPG expands and evolves, Mutiny's solutions will evolve with it providing security and peace of mind. Mutiny's functionality is continually enhanced, bringing more and more benefits to clients, often at no further cost to them.

"It is important that systems continue to perform at their best for the sake of the gallery and their visitors. Mutiny are proud to provide an integral role in ensuring this. Mutiny will continue to evolve and grow to accommodate the growing needs of the gallery." Andy Murray - Mutiny's CTO.