The company and the product

All these terms refer to the piece of hardware you have been shipped and are about to install.

This refers to the devices on your network you intend to monitor; you might call them servers, switches, machines, computers, desktops etc.

Nodes are represented by a collection of icons to aid in the recognition of its role.

One of the protocols used by the Mutiny system to gather information from your devices.

The web based Graphical user interface (GUI) used to control the Mutiny system.

The applications and packages doing the monitoring work and providing the data for the front end.

The Mutiny GUI uses colours and symbols to indicate the status of various monitored properties within nodes.
The status colours are as follows;

Warning
One or more properties have passed the warning threshold

Acknowledged Warning
The warning state has been acknowledged by an admin for a pre-selected time.

Critical
One or more properties have passed the critical threshold

Acknowledged Critical
The critical state has been acknowledged by an admin for a pre-selected time.

Unknown
One or more properties cannot be retrieved

Not Polled
The node has been excluded from the polling group

2.9.9. [ICON] Maintenance Mode
This node is in maintenance mode, its events and alerts are ignored until it has returned to normal operation.

Double clicking on a node icon will open the node's status panel. 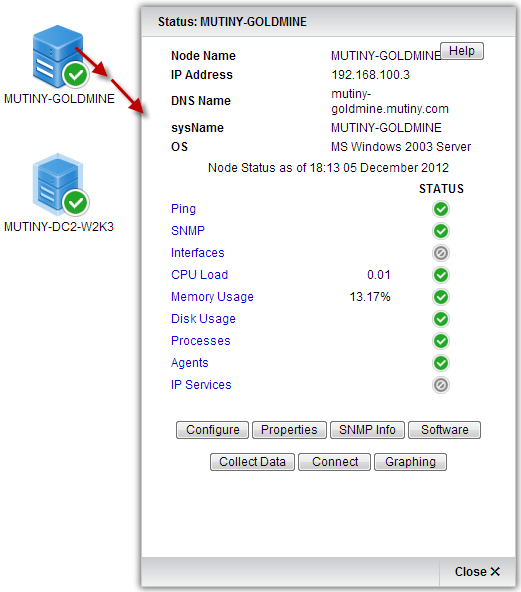 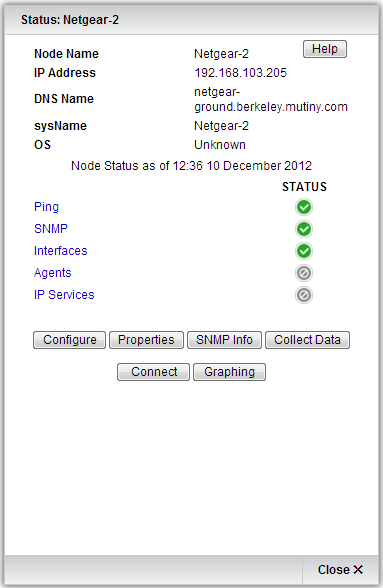 The first shows the Status panel from a Windows server; The second shows the Status panel of a router. Note the shorter list of properties on the router.
Most of the properties in the Status panel are self explanatory; however the Agents group needs further explanation. Contained within this group are all properties that are derived from the node using SNMP, but do not fit into any of the groups above. For a Windows Server this may include the RAID controllers (HP and Dell hardware). For an environmental monitor it may include temperature and Humidity. For a HP printer it might be paper and toner status. 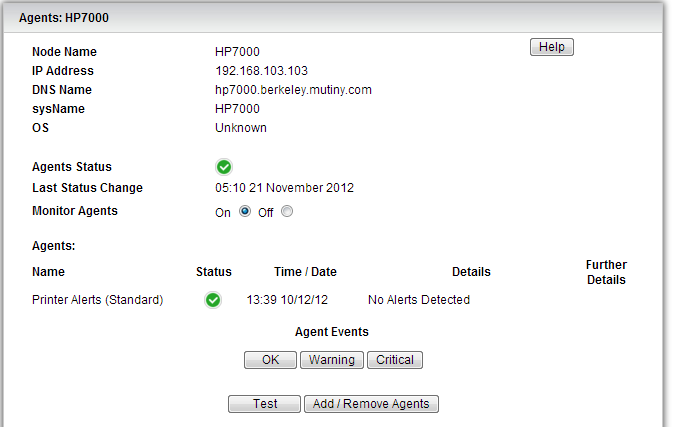 Also included in this group is data from Remote Agents which are described in the next section.

Remote agents are small pieces of software that are installed on the server that is being monitored in order to obtain detailed information from a specific application.